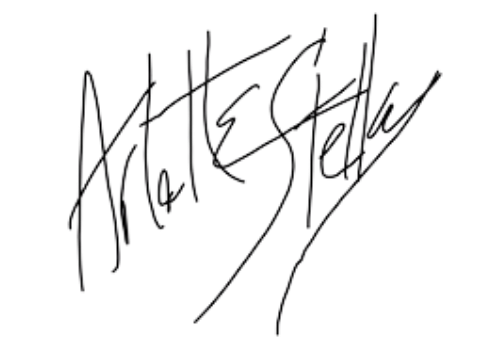 I am a late blooming, self-taught artist whose entire life has pointed me to this moment, these pieces and this work. My deeply philosophical and abstract nature has finally found a safe place for expression.

MI use acrylic in most of my work, with occasional collage and pastel. Large canvases and wide-open spaces are my playgrounds.  In that expanse, I build color, space and imagination into abstract expressions with a message.

What follows is my magical, mystical journey to the artist I am today.

I was adopted from an orphanage in Germany at 10 months of age. When my mom and dad brought me home, I was so sick a doctor told them that another two weeks in the orphanage and I would have been dead. Thank you, Mom! 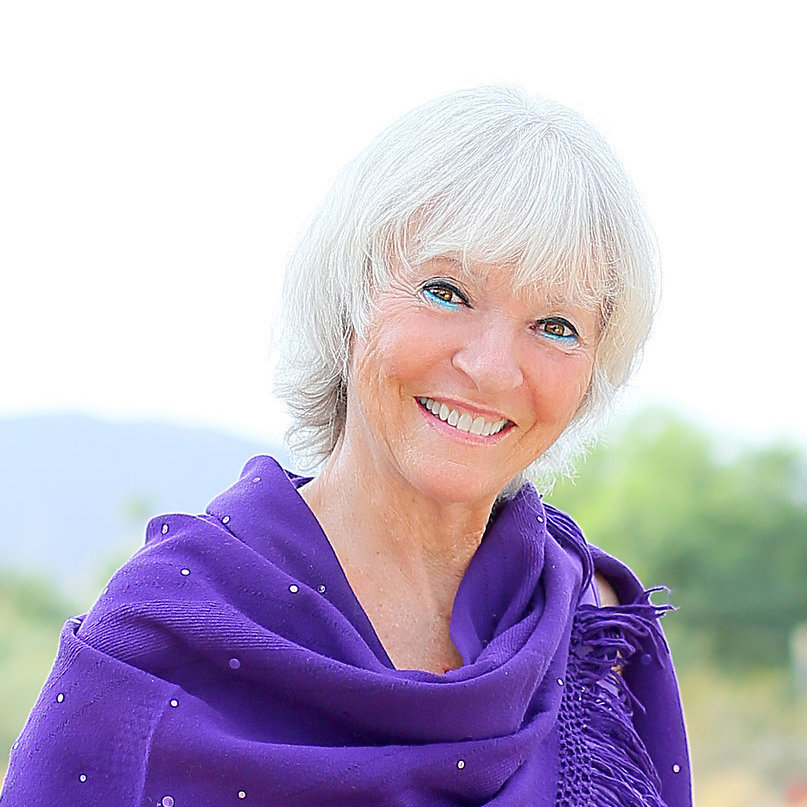 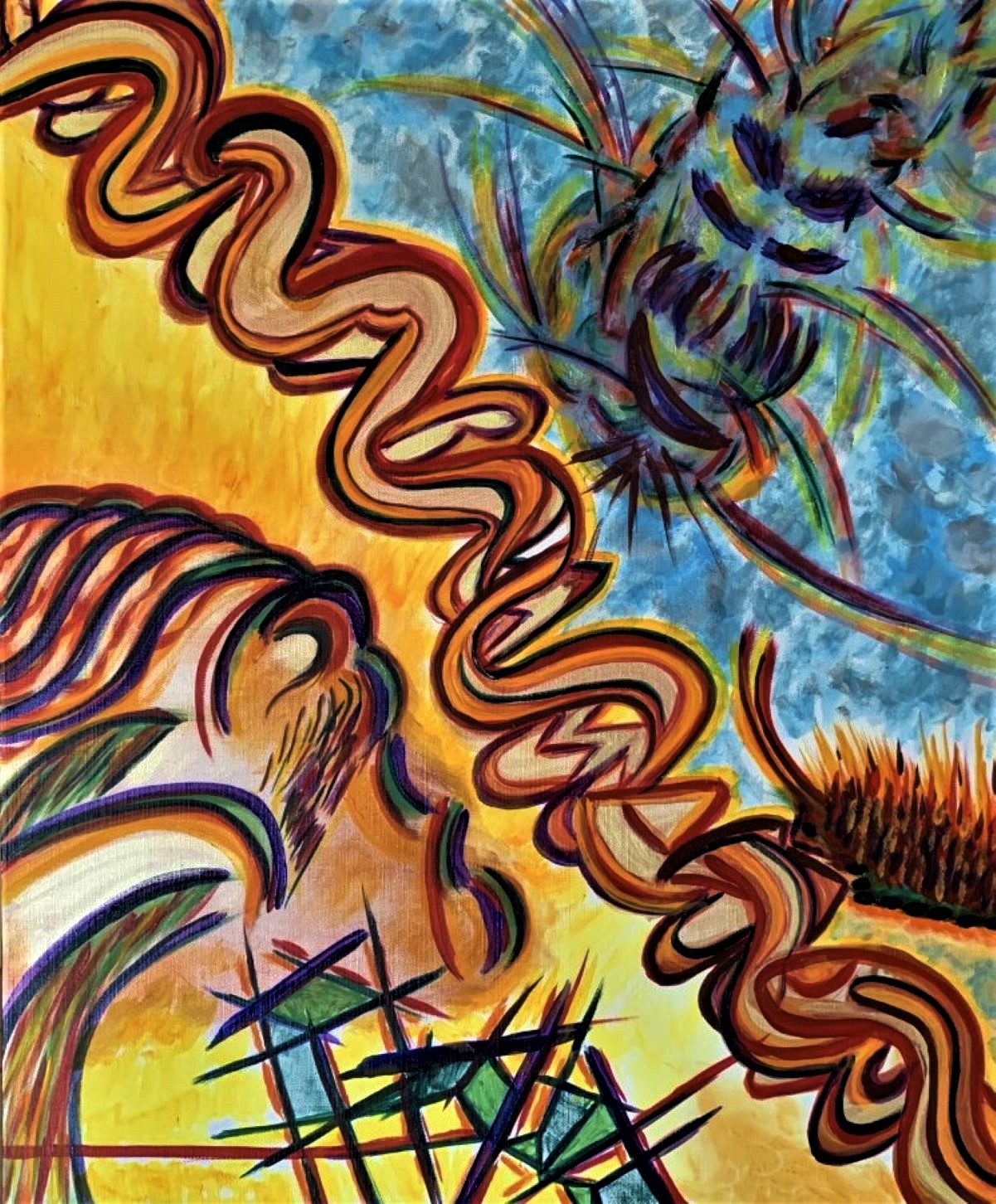 Dad was a career Army Officer. His assignments required that we move about every 18 months to another country. Since I was born a German citizen, because of these travels in and out of the States, I had to become a U.S. citizen before I could leave for yet another country and return.

Though this constant traipsing around the globe gave me a bit of a travel bug, even more importantly these moves literally broadened my horizons, and afforded me opportunities to experience many cultures and languages.

When I was 12, we finally settled in the San Francisco East Bay Area: Alameda to be exact. High school was a uniquely unsatisfying time for me. Eager to get out, I convinced the school to let me graduate in just three years rather than four. After all, I argued, ‘My grades are excellent and I can go to summer school to ensure I learn everything I need for college.’

After a short stint at University of California, Santa Barbara I worked nearly two years as a flight attendant. (Yep, that travel bug from the Army days was alive and well.) This was certainly the best way to see more of the world and earn money at the same time!

Then some itch within me needed to be scratched. I was more than ready to return to school. I was accepted to the school of my first choice: University of California, Berkeley! After earning an undergraduate degree in Political Science, law school beckoned. A few years later, I was a lawyer!

Clearly, it is not my style to be just one thing. So, while practicing law, I studied acting with Jean Shelton, earned my Screen Actor’s Guild card and performed in all manner of productions. I also taught Iyengar yoga, privately. In addition, I studied a form of Hinduism (Sanatana Dharma) and was initiated with the Gayatri mantra and given a Sanskrit name.

Notice, if you will, no art/painting/drawing education or experience in this time.. 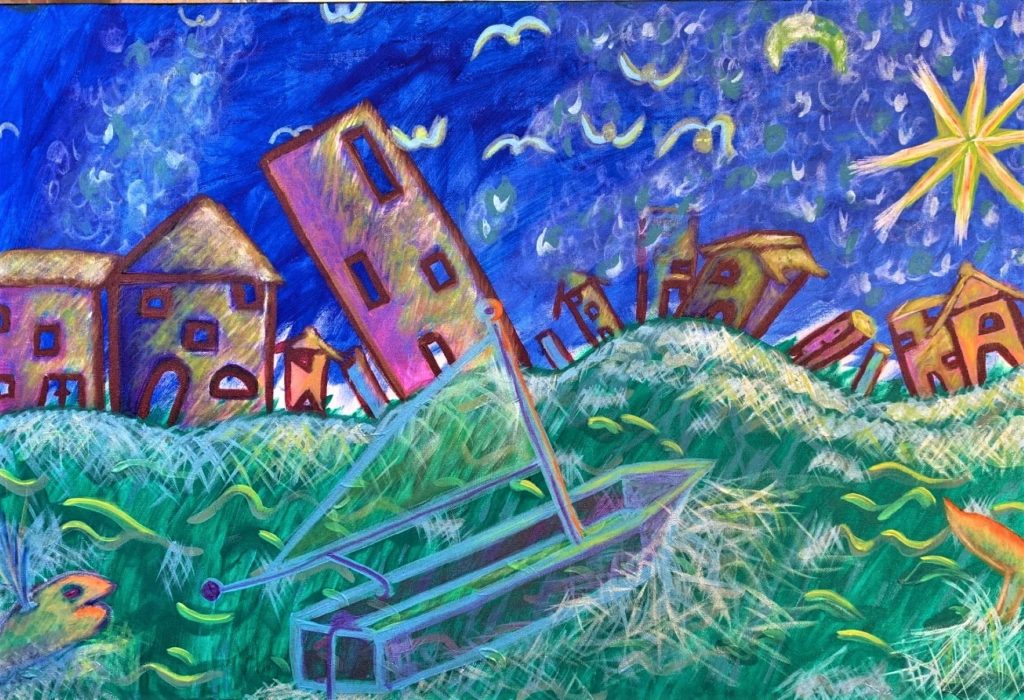 Down By The Seashore Star

Later, life happened and I moved to Los Angeles, continued to practice law, and allowed the artist in me to emerge even more as I performed in theater, commercials, TV and movie shorts, as well as continued teaching yoga, privately.

More of life happened, and I found myself in the Palm Springs area practicing law. Eventually I pursued other post-graduate degrees. A Master’s in Religion with specialty in Buddhism and Judaism. A PhD in Philosophy in Religion with emphasis on Buddhism, Judaism and Process Philosophy. Then later, I earned another Masters in Ethical Leadership. The Capstone project of that led to a podcast that I created and recorded for many years. 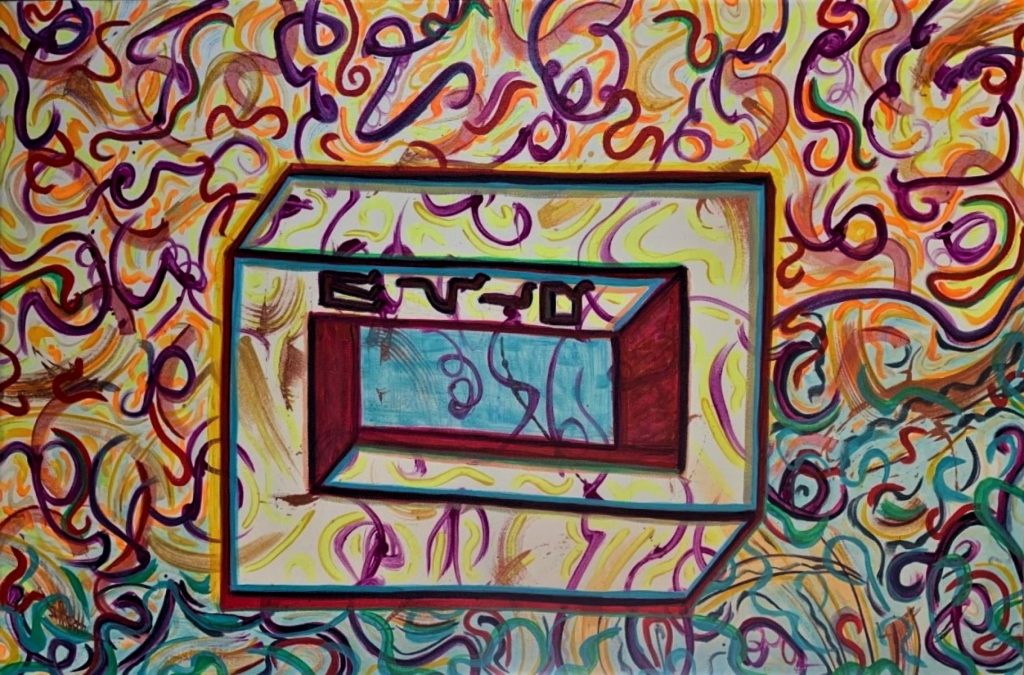 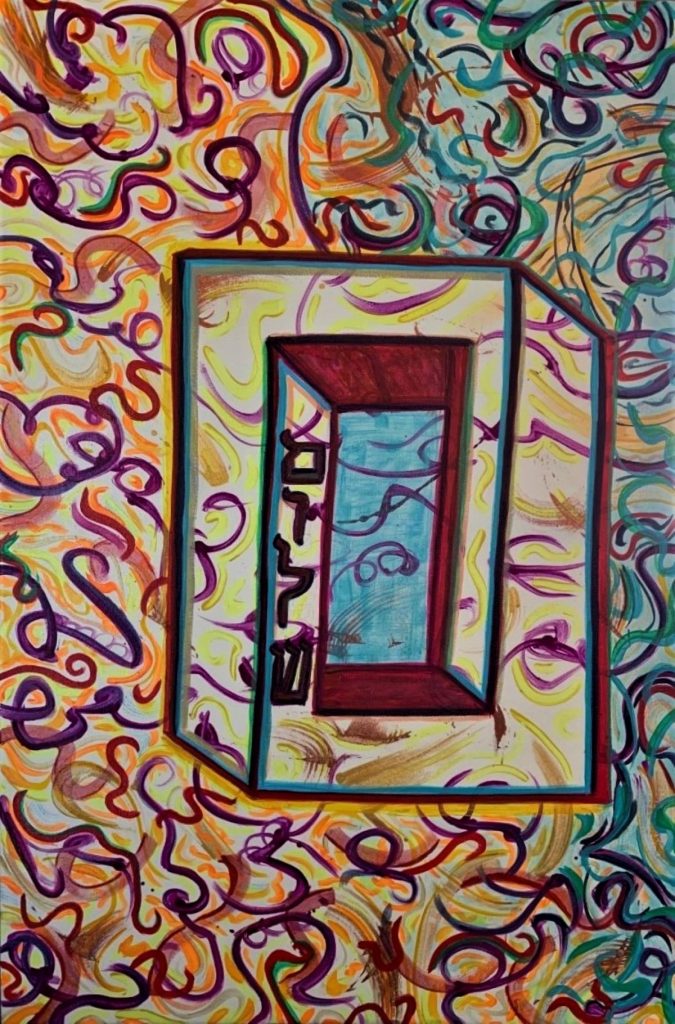 I wanted to meet my birth mother.

It was for two main reasons. One, since I was born a German citizen, I needed to know if my heritage included Nazi blood. And two, I wanted to learn about my genetic background, since every day my health felt like a roll of the dice from a medical standpoint, at least!

I learned from meeting her that I was, in fact, born Jewish as was my birth mother and her mother and so on back in a long line. Now I was related to a whole people and their history, genetics and all.

From the time I learned I was born Jewish, I wanted to be Bat Mitzvah’d. When I finally accomplished it, I surprised by the response of my body and mind as I stood at the Torah reading my portion.

I felt an unexpected and deep bond with Judaism. It was like a hasty fastening of a shirt button I didn’t realize was open.

Notice, if you will, still no art/painting/drawing education or experience. 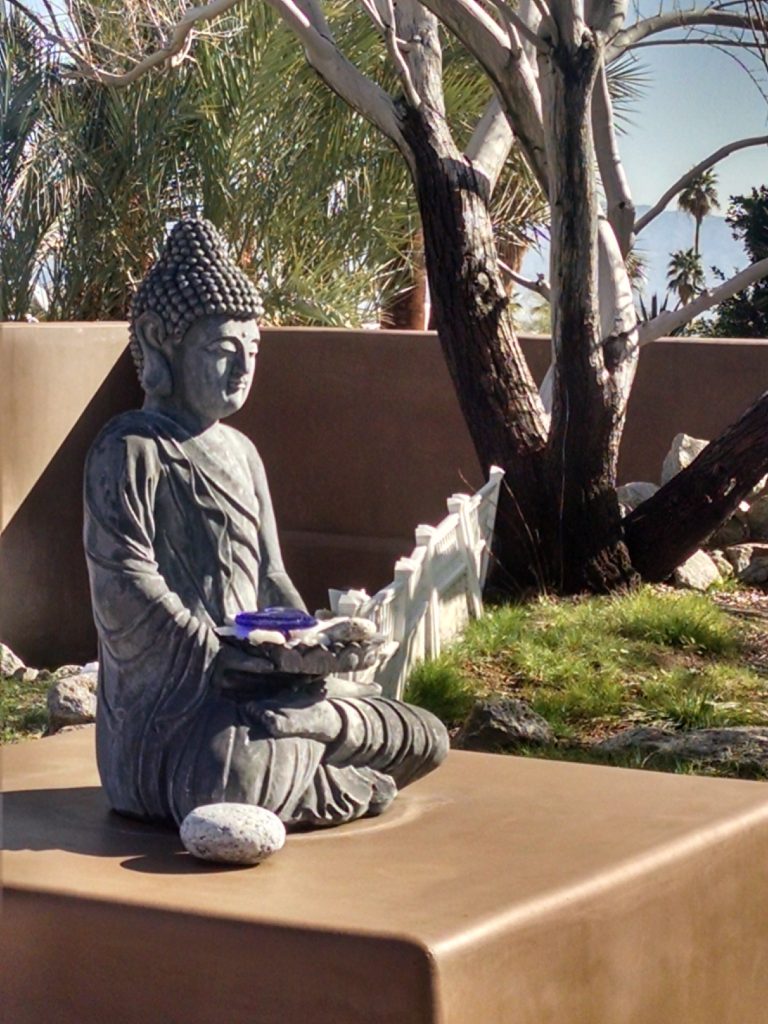 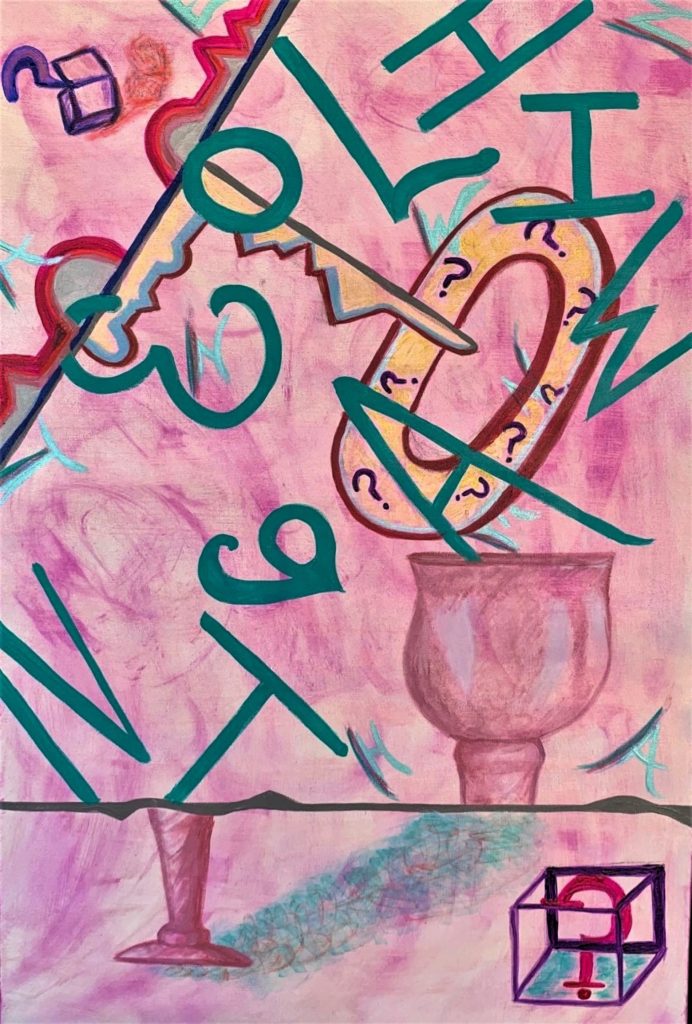 The Key To When

Retrospectively, I can safely assert that one of the main reasons I moved to the Palm Springs area (although I did not know this at the time of the move) was to meet my wonderful husband, Patrick. Admittedly, when we first met at the local country western dance bar, I did not remember meeting him at all.

He, however, remembered me for another two years even though he was out of town the majority of that time. During that time, my life continued as I blissfully dated and danced my way through country western and swing dance events with groups of friends.

Meanwhile, Patrick worked a job in the Pacific Northwest. When that job ended, he moved back to the Desert, full time, and promptly called our mutual friend, Fred.

Fred was my favorite dance partner on the country western scene. Patrick asked him, “Do you still dance with that blonde attorney?” Fred answered with a knowing smile, ‘You mean Arlette!? Sure. How about I have her at the dance place on Thursday night?”

Some six plus months later we were married and now over 25 years later, I love him more and am ever grateful that he allows me the space and safety to UNcover my latest iteration with abandon! In turn, I have encouraged and nourished his unfoldment, which I call UNcovery, as well. 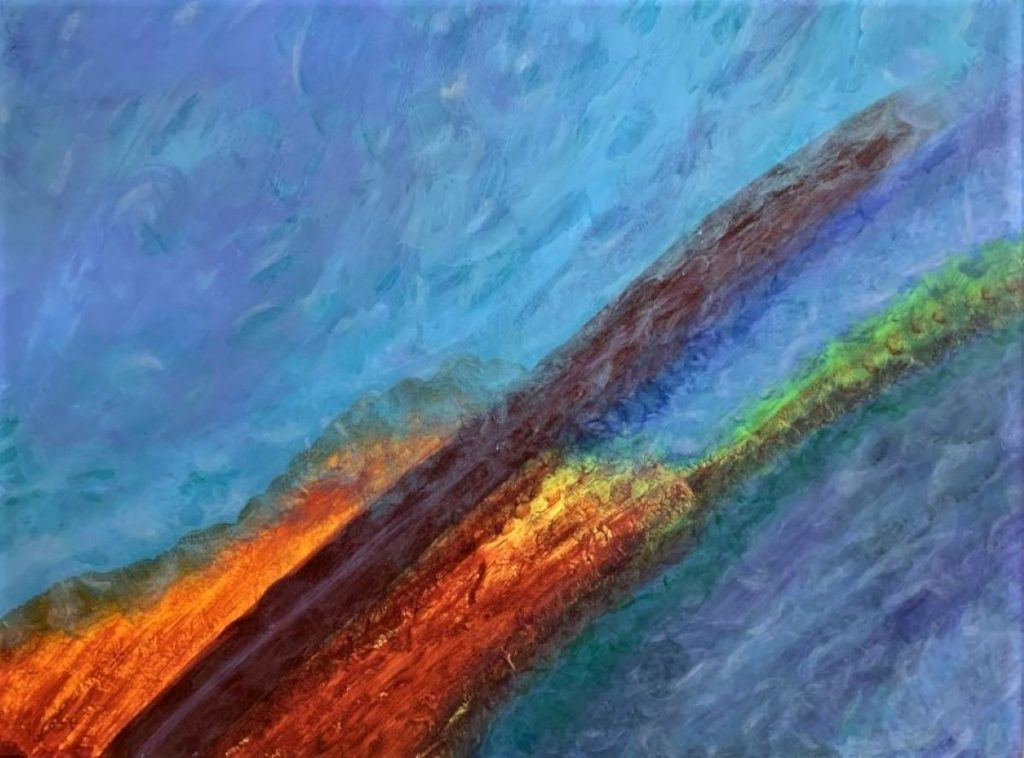 All the education, life experience, pursuits, and professions inform every brush stroke I make in my conversation with each canvas and every color. Each painting names itself, sometimes early in the journey but always by the end. There is a special relationship, a mutual endeavor that is nurtured and expressed in every piece.
Generally, acrylic on canvas or board best supports the development of my relationship with the art. Sometimes, I play with pastels and sometimes I enjoy using a black background rather than the usual white. The moment, the canvas, the relationship tells me what’s next. It is all about deep listening.

I am grateful for the support and encouragement I get from friends, family and my dog, Vashti.

May you and yours experience many reasons to feel gratitude, every day.